The Safari took the opportunity to venture further afield now that Lockdown is just about over. We arranged a socially distanced meet up with good friend JG at the always brilliant Lunt Meadows Lancashire Wildlife Trust reserve from where we'd recently seen some awesome pics of Water Voles. Now Water Voles are a species of our youth and the ditches between the fields where we grew up are only a stone's throw from Lunt Meadows. We wandered these fields regularly and often heard the unmistakable 'plop' of Water Voles diving in to the water when they heard us coming on our bikes or collecting Blackberries with our Nan, we'd often see them swimming in the ditches too, great creatures but when we thought back to the last time we'd actually seen a live one it must have been over 40 years ago despite having undertaken surveys for them in more recent years. Yes we'd found feeding lawns, latrines, the tell-tail 45 degree nibbled stems, burrows but not an actual animal!
By the time we arrived it was already getting hot and we worried that it might be too hot for the Water Voles to come out but J had a cunning plan.
We set off full of anticipation stopping at the first screen for a quick shuffy. The bench there was of interest J pointed out a Leaf-cutter Bee's nest in a hole in the wood and another in a larger crack - great stuff. To the right there's a small island in the pool where we saw both Ringed and Little Ringed Plover, the latter becoming #159 on our Photo Year List Challenge.
Over the water there were dragonflies in profusion getting our hopes up of a visiting Hobby.
A cracking start to the safari.
It was getting hotter by the minute so off we went in search of the voles. A Grasshopper Warbler sang from the rushy 'field' to our right. No chance of seeing it but it sang continuously all the time we were at that part of the reserve.
We had a short wait but J's plan was put in to action, she lobbed her half eaten pear over the ditch landing it square on the voles feeding lawn - a perfect shot! Within a few minutes the sweet scent of oozing pear juices wafting over the water was too much for one of the juvenile Water Voles and out from its burrow it came, swimming across the ditch to the feast.
Like a certain TV naturalist, CP, we can't abide the word 'cute' but is there a better one to describe these furry beauties. 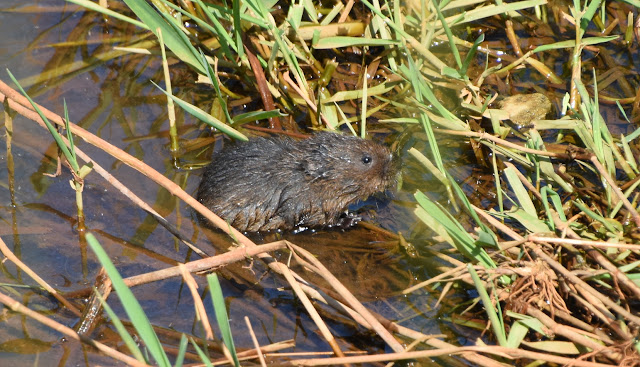 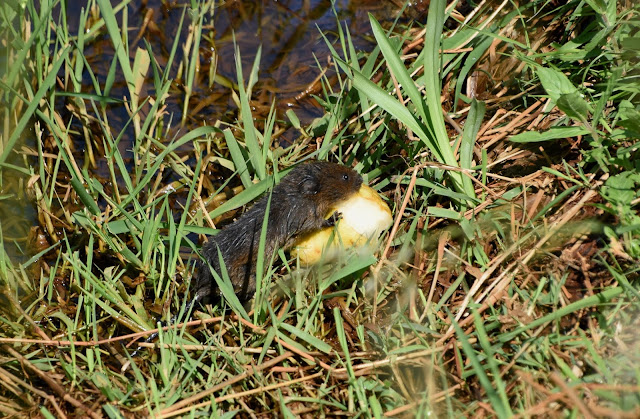 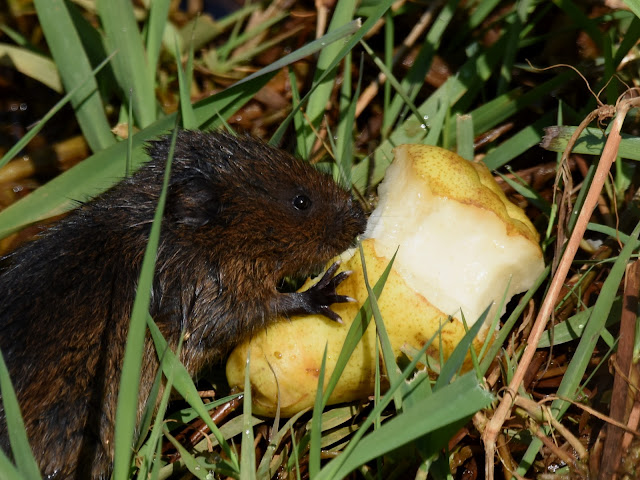 It chomped away from several minutes being enjoyed by several watchers stood with us, while to keep them as undisturbed as possible general passers-by and dog-walkers were deliberately kept uninformed and left to wonder why there were a gang of people stood there looking at a dirty ditch.
Once the little chap had eaten it's fill off it went back to it's underground world. 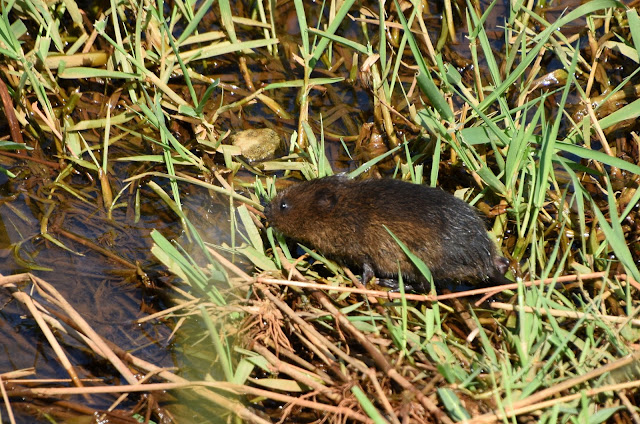 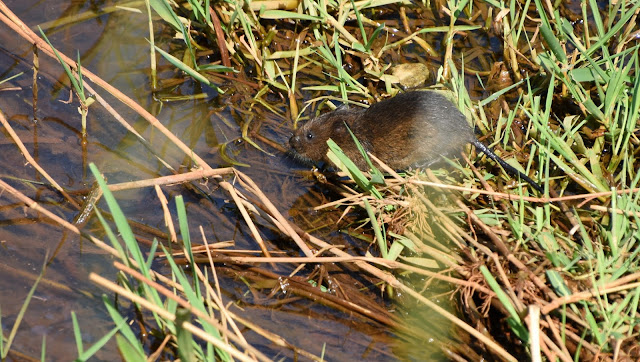 Somehow we missed the swimming shot...dohhh...
Moving on we came across this small Toad just sitting looking rather nonplussed at the side of the track. Not the best of days for an amphibian to be out in the open, it was already well over 25C. 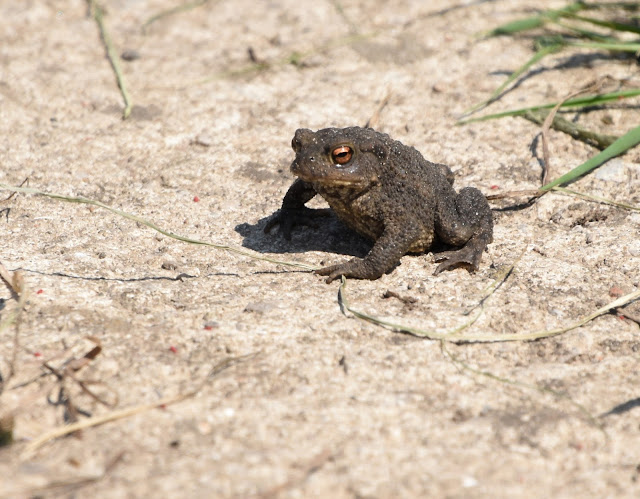 Continuing the circuit we watched butterflies and looked fro other insects among the profusion of riverside vegetation.  A small brood of two young Tufted Ducks with their mother were on the river. 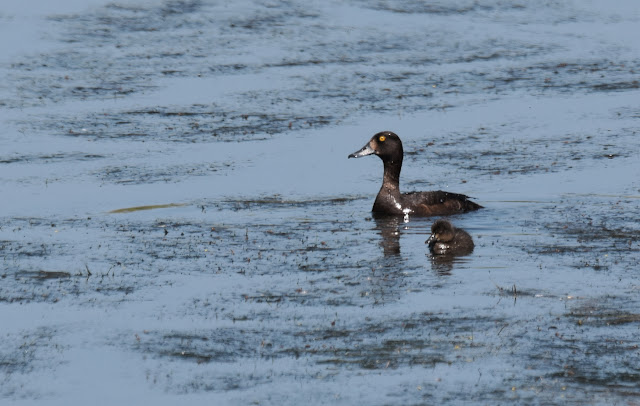 Great to see as this river in our youth was little more than a chemistry set and open sewer and is now teeming with life. Unfortunately none of the Banded Demoiselles would sit still for a photo opportunity - we'd never have dreamed of seeing anything like these along the river all those years ago.
Nesting Avocets are on site too, another 'wouldn't even have dreamed of' back in the day. It was a long long trek across country to the fabulous East Anglian marshes to see them in those days.
At the third screen dragonflies were very active, mostly Broad-bodied Chasers, some of which were good enough to perch up. 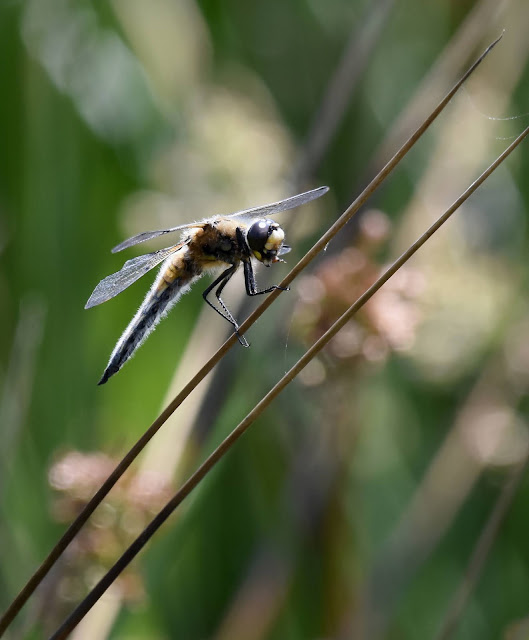 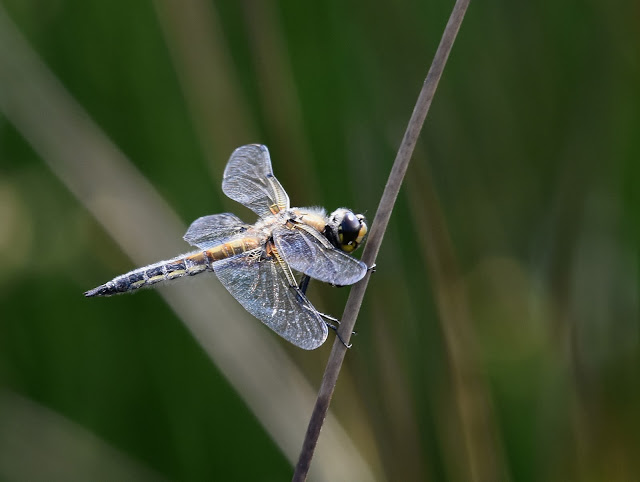 Also there were couple of young Lapwings already fledged and another Little Ringed Plover.
What a fabulous morning's wildlifing but now it was time for some lunch and boy were we glad we hadn't packed any chocolate, the inside of the car was like an over when we opened to doors.
After quickly demolishing a bag of cheese and pickle butties and having a good slug of fizzy orange juice it was back out on the circuit again. This time our wait for the Water Voles to show themselves was unsuccessful but while we waited we had some interesting butterfly action. Small Tortoiseshells mooched by as did a couple of Commas. But sharp eyed J soon realised that one of the Commas wasn't a Comma at all but a fritillary, a Dark Green Fritillary. Now these are present on the coastal dunes a couple of miles away and have been seen on the dune nature reserve on our side of the river in recent days but we never expected to bump into one at an open wetland site like this. 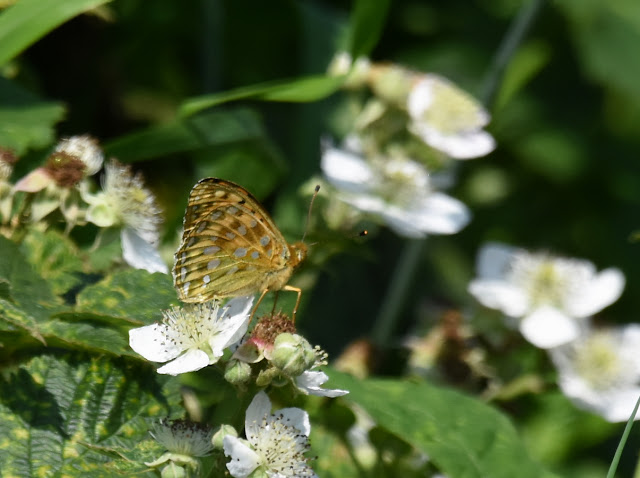 It could well be the first record for the site, to today our limited investigations haven't revealed any earlier records not even from the days prior to our visit. It seemed settled patrolling a territory bounded by the Bramble bushes either side of the ditch regularly stopping on both flowers and leaves but always just that little bit too far away. With the day being so hot, toughing 30C now, there was no way it was going to bask with its wings open but at least with its wings furled up you can make put the green sheen from which it gets its name.
Also on territory in the Brambles was a showy Whitethroat that flitted from fence to bush and back and occasionally towered into full song-flight mode. 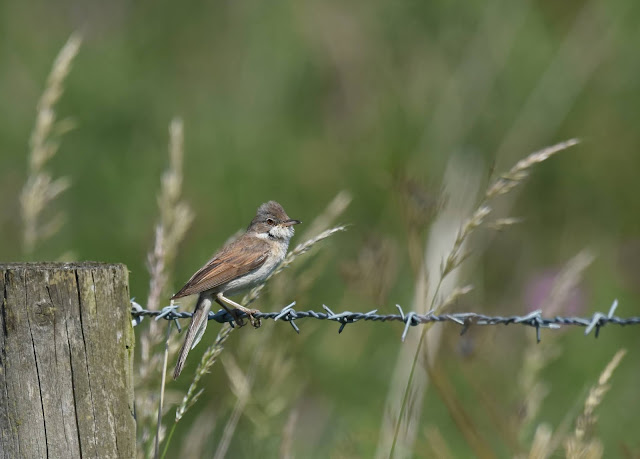 Further round we again looked for butterflies along the path to the little hide. The pat sides are festooned with the gorgeous blue flower spikes of Viper's Bugloss but the hunt for skipper buttetflies wasn't as successful as hoped, a couple of brief sightings of Large Skippers were all we had.
But by now the Avocets on the adjacent pool had moved into a better position for viewing and we found another small juvenile that hadn't been hatched more than a few days. The first brood to hatch were well grown now but of the two youngsters only one remained after a hefty thunderstorm a few days earlier. 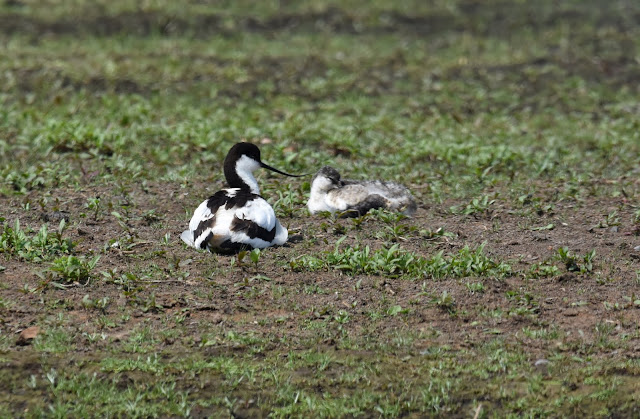 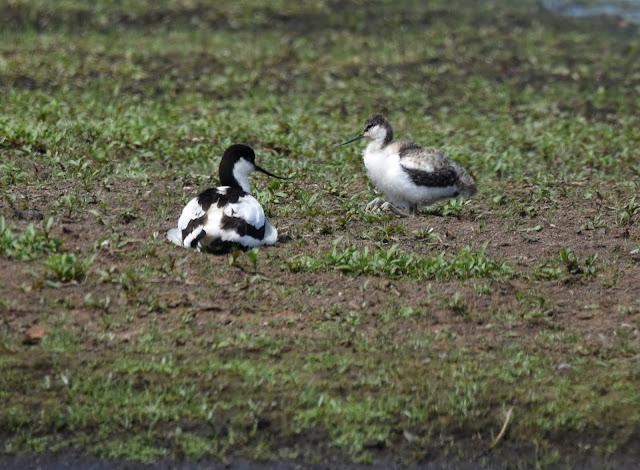 The great views of the Avocets nicely wrapped up our day out as time was pressing now and we needed to get homeward bound before too long.
So it's a huge thank you to JG for the company and up-to-the-minute info and the perfectly lobbed pear of course, and to Lunt Meadows for being as utterly brilliant as ever.
We've had some great wildlife encounters around and about Base Camp too during June and we'll be bringing you up to date with the best of those shortly - watch this space.
Where to next? We expect to get out on safari further afield again soon but aren't sure where yet...oh decisions decisions, there's so much good stuff to go and look at/for.
In the meantime let us know who's turned up brand spanking new in your outback.
And remember whatever you do, stay safe,maintain that social distance.