The big news this week (and when I say big, I mean it both literally and figuratively) concerns the all-too brief appearance of a Caspian tern that graced us with its presence yesterday (Thursday). Seen initially from Causeway Hide the rare seabird took off in the direction of Arnside where it was later rediscovered by diligent local birders. Unfortunately its stay there was also short-lived and once again it vanished before other birdwatchers could get out to see the huge tern. A second flying visit to the Causeway was noted late afternoon by the same individual who had earlier relocated it at Arnside, but once again this visit to Leighton Moss was not a lengthy one. Hopes of a reappearance on Friday were not looking good by lunchtime with no further sightings. As I write this, I'm still hopeful that it might drop in during the late afternoon but I won't be holding my breath! 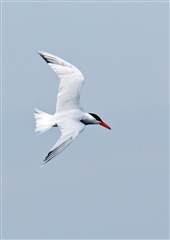 Caspian terns are pretty rare birds here in the UK and the last one to wow the crowds at Leighton Moss was back in June 2017. Prior to that one was at the Eric Morecambe Pools in 2005. So, as you can imagine, many local and not-so-local birders would have liked it to stick around a while! Globally, these large distinctive terns are widespread with a cosmopolitan distribution that includes Europe, Africa, Asia, Australasia and the Americas. And Leighton Moss.

In other news, the marsh harriers have continued to perform well with the three youngsters spending increasing time exploring the vast reedbeds of the reserve. The adults are still bringing food in for the trio but they will doubtless be learning how to hunt for themselves now too. Ospreys are still be seeing most days; the two chicks from nearby Foulshaw Moss have now fledged and may start making visits to our pools along with other post-breeding ospreys from around Cumbria and further afield. As ever, it's the warmer days when we may see the occasional hobby here as they swoop in to feast on the plentiful supply of dragonflies on the wing.

Again, we'd like to say a big thank to you all of our visitors and supporters - the overall response has been very positive and complimentary regarding current access and infrastructure on the reserve during these challenging times. We have continued to welcome back many familiar faces and we have also seen lots of new visitors who have been exploring this wonderful nature reserve for the first time. Many established members have been very generous too with donations and we are delighted to share that we have had many people who have become enthused by the natural world in recent times joining the RSPB and helping us to continue to give nature a home.

Don't forget to follow us on Facebook and Twitter for regular news and updates and I hope we'll see you here at Leighton Moss in the near future!

Caspian tern photographed at Leighton Moss in 2017 by David Talbot